WHERE IS NEW EARTH? 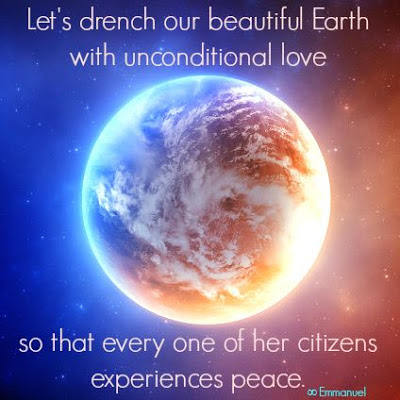 There was at one time long ago, when Earth had a different Angular Rotation of Particle Spin (ARPS), but existed in the same place it does now. This original Earth was much larger than the physical planet we stand on now. That original Earth expanded out to where we think of the Van Allen Belt exists in today's science books. That Van Allen Belt area was originally the Spiritual or Etheric Earth in all of it's spiritual splendor until the dark forces placed a net over it and placed the Time Vector Rod in the Earth. This Time Vector Rod created a reversal of energy fields in and around the Earth. This energy field has been sucking in all spiritual substance
and condensing it into matter for millions of years. This was how both Lemuria and Atlantis were sucked inside of the Earth's crust and placed in a hybernization zone.
This is how the Earth shrunk.
The Earth that used to be here - is actually still here - up in the Etheric layers - but presently it is being harnessed by the Nets used to keep us under control and manipulation through Reversed Angular Rotation of Particle Spin (ARPS) and lowered Base Pulse Rhythm.
The Nets caused by the implantations of grids and negative shields are now being completely removed and the distortions are beginning to clear out of our planetary system by all of the work being done by our Beloved Guardians and the help of the Light Workers.
The New Earth is actually the Old Earth - the way it was before all of the distortions were set in her grids to create a distorted ARPS and lowered Base Pulse Rhythm (BPR).
The New Earth is about 10,000 feet above Sea Level. We can't see it Now
because our Angular Rotation of Particle Spin is distorted. The Guardians have created a platform in the Aurora fields that allows them to connect this place to that New Earth.
This will bring us into a time continuum shift as we move into the slide zones that lead to the New Earth, which contains the frequencies of both Earth and Urtha - the Hosting Star Shield around Earth. This Hosting Shield is called Aquafaria.
Aquafaria is only one part of the entire Cloud City structure that will allow us to slide back into our original home. The Aquafairan host was created by Blue Dolphinoids from Sirius B- the twin etheric matrix of Sirius. The original Sirius is still in the Aquarius Galaxy (which scientists renamed Andromeda) The Blue Dolphinoids created this hosting shield to allow for ascension from Earth in Planetary Sphere to rise back into the third sphere where the Galactic Stars have realigned to bring us back home.
There are several other Cloud Cities containing star cities from Pleiades, Venus, Arcturians and others. There is the Winterlands who host a shield a little more etheric than Aquafaria.
The hosting zones are already complete and have actually already aligned into the Earth's field. The only thing that is awaiting the shift is our own Consciousness aligning into this new reality.
Some will be able to shift up into the highest level of this New Ascension Earth and continue on up into Urtha and go into Star Burst with Urtha. Others will stay in the lower 5D fields of the Ascension Earth Zone that is almost identical to this earth with all of the darkness removed. This darkness will be transmuted gradually. Each individual must take responsibility for transmuting their lower frequencies into the higher frequencies or they will just stay in a 4.5 field that never rises into the 5D filed. Eventually they will desire to be pulled up by those with higher frequencies.
The dark elements will not be able to attach to the New Ascension Zone. These distortions - these grids, shields, funnels - tools used for controlling the Earth and those on it- won't exist in the New Earth.
What we have experienced as Mother Earth creating our wonderful spring times was a glimpse of how she will be continuously when her nets are removed. We will experience uncountable colors, fragrances, multitudes of new species that breath both air and water. The visions that we have not yet seen are beyond our present comprehension. All of the Nets that were placed on Mother Earth and her inhabitants that have resulted in pollution and oil spills will be finished forever.
The reason the guardians are able to help align planet earth and the entire system at this time is because of the presence of the Photon Belt and the high intensity of light available. They have been acquiring sun energy from Sirius B and turning it into Aqualene Healing Energy. The waves of Aqualene Liquid Light Pouring in on the Earth and on us is our healing agent.
The Earth drinks this healing aqualene liquid light and sends it back up as
Turquoise Blue Liquid Light Energy through the Earth's body and through our Spirit Body. The Earth has a physical - Atoni side and an Adonis - Spiritual body side - so do we.
Namaste,
Crystalai