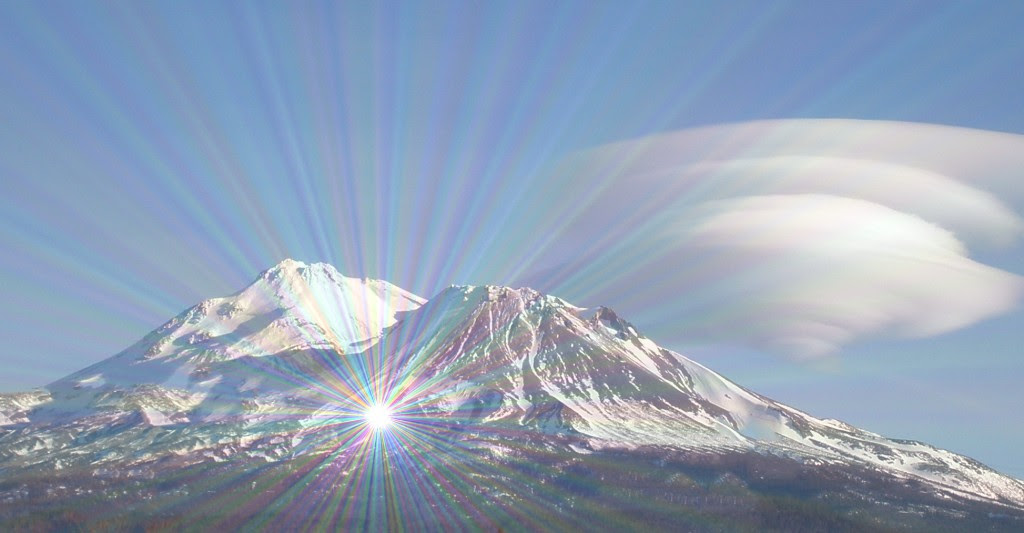 “Greetings from Telos! I AM ADAMA, Ascended Master and High Priest of Telos, a Subterranean City beneath Mt. Shasta in California. I am dictating this message to you from my home beneath the Earth, where over a million of us live in perpetual peace and prosperity.
We are human and physical just as you, except for the fact that our mass consciousness holds thoughts of only Immortality and Perfect Health. Therefore, we can live hundreds and even thousands of years in the same body. I, myself, have been in the same body now for over 600 years.
We came here over 12,000 years ago before a thermal nuclear war took place that destroyed the Earth’s surface. We faced such hardships and calamities above ground, that we decided to continue our evolution underground. We appealed to the Spiritual Hierarchy of the planet for permission to renovate the already existing cavern inside Mt. Shasta, and prepare it for the time when we would need to evacuate our homes above ground.
When the war was to begin, we were warned by the Spiritual Hierarchy to begin our evacuation to this underground cavern by going through the vast tunnel system that’s spread throughout the planet. We had hoped to save all our Lemurian people, but there was only time to save 25 thousand souls. The remainder of our race perished in the blast.
For the past 12,000 years, we have been able to rapidly evolve in consciousness due to our isolation from the marauding bands of extraterrestrials and other hostile races that prey on the surface population. The surface population has been experiencing great leaps of consciousness in preparation for humanity to move through the photon belt. It is for this reason that we have begun to contact surface dwellers to make our existence known. For in order for the Earth and Humanity to continue to ascend in consciousness, the whole planet must be united and merged into ONE Light from below and ONE Light from above.
It is for this reason that we are contacting you to make you aware of our underground existence, so you can bring the fact of our existence to the attention of our fellow brothers and sisters above ground.
Our book of channeled messages is written to humanity, in hopes that they will recognize and receive us when we emerge from our homes beneath ground and merge with them on the surface, in the not too far distant future. We will be grateful to you for the part you play in helping us broadcast the reality of our existence. We thank you.
In the name of the One Creator of All, I AM ADAMA
Adama is from Lemuria, an ancient civilization. At the time, of Lemuria’s height, Adama was an initiate in the Temples that were prominent at that time. After the destruction of Lemuria by Atlantis, Adama went underground with thousands of others, to establish Telos.
Adama is not different from you, although I am hundreds of years old by now. So I have made the benefit of many life times woven into ONE. This has given me great insight and great wisdom, which most people don’t begin to gather until the end of their short life span.
So, living so many years definitely has its benefits. For me, I can astral travel to anywhere I desire. I can also telecommunicate to anyone in any locality of time and space. These are all things that everyone in Telos can do, because we’ve had the benefit of lifetimes of practice. So, Adama is not so different, just more experienced on how to use life’s opportunities.
You, on the surface, are situated ABOVE us, and BELOW the Ashtar Command. You are receiving LIGHT from above and below. You are between two great forces of Light. We here in Telos, watch over your surface population very carefully, monitoring your movements and reporting back to our councils. We know all that occurs on the Earth’s surface.
We embrace the Light as it dawns each day, and bless the darkness as it descends on our homes. We bless all of life’s activities. We bless this great planet and all its life forms.
We are grateful to be a part of this grand experiment. We are grateful to be a part of the Earth’s great training ground where we are all being schooled in life’s evolutionary process. Someday soon we are anticipating our emergence unto the surface. We await for this time – we pray for this time – when we can be reunited with our brothers and sisters again.
In the glory of the Light of God that is unfolding on the Earth plane. I AM ADAMA, and my love goes forth to you. Adonai.”
Channeled by our beloved sister Dianne Robbins in Mt. Shasta, CA

Adama is an ascended master and high priest of Telos. Telos is a 5th dimensional city, which has been established underneath sacred Mount Shasta, CA after the destruction of the two civilizations Atlantis and Lemuria. Adama’s message assists humanity to ascend with their physical bodies into the 5th dimension of love and light and to create Heaven on Earth. One of the tools for the ascendant (those who would like to raise their vibrational frequencies and to integrate their light bodies) is to raise our consciousness and to become more aware of the ongoing process of ascending our physical, mental, emotional and light body, which already has begun. We are most grateful for all the assistance given by the 5th dimensional realm of the Ascended Masters and the Angelic Hosts.