CONVERSATION WITH OUR GOD-SELF: THE FUNCTION OF A GURU 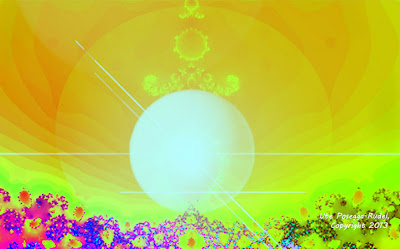 There is a wide-spread misunderstanding about the function of a Guru, especially in the New Age community.
This conversation with our God-Self is aimed to bring greater clarity into this.

But before  the actual conversation, it is perhaps first necessary to clarify why I call it “our God-Self”, and not “my” God-Self. Some of you might wonder about it. And I never really discussed this  before.

It is simply a matter of definition. The God-Self in my messages is the One Self of all things, beings and happenings, the One Source and Divine Consciousness of all creation, that is paradoxically also appearing AS individual form and consciousness. So if you believe it should be “my God-Self”, then you are coming from the point of view of your own “Higher Self”, which is the Higher Mind of your incarnate identity. As such it is still an individual being, even if appearing in subtle form.
Whereas Source is the “substance”, the alchemists “prima materia”. “The Mother”,  from which even the Higher Mind or the Higher Self is arising.

As “Our” God-Self is the Oneness of us all, It naturally can speak to every heart, because it dwells at the core of every being.
I hope this serves your better understanding.

In the following conversation I asked our God-Self about the importance and function of the Spiritual Master. As we know, in the New Age movement Spiritual Masters are no longer “in”, because everybody seems to “know” already that they are their own masters and do not need anybody “outside” of themselves to teach. This is of course very true, in case one is really in touch with their own inner Master or very Source.

But there is often a confusion about mind and feeling, the mental substance that is arising in consciousness, and pure consciousness itself which is the domain of mere feeling or feeling attention.
This confusion can lead to the idea that merely thinking one’s Self is already being in touch with It. But what happens in this case is that one has created an idea of the Self, but which is not the Self Itself.

Many members of the New Age philosophy are making this error. It requires a self-transcending practice (“self” written with a small “s”), deep insight, self-understanding and actual “Self-inquiry” to a degree - to come truly in contact with the Self, that is the Mother of the Higher Self. It emerges only when the mind becomes still. When we release all concepts about ourselves and the world, high or low, and when we stop searching.

Now the conversation with our God-Self begins.

Q: Many people believe that a Guru is not necessary and that he/she is  a personality who enforces him/herself on the disciple and makes him/her dependent and weak. Therefore only weak people would be looking for a Guru.
On the other hand it is traditionally  said, that God Is Guru.
What does this mean and how does this work, how can an individual be the Unlimited, the Source, the All-That-Is?

A: First of all, please understand that a True Guru is a shortcut. The relationship with a Guru can significantly shorten the time of one’s spiritual process and Self-Realization.

From the 'point of view' and Realization of a True Guru He Himself (or She Herself) is not an  “other”. This is only the beginner's perception. For  the True  Guru only One exists. One Self or One Divine Conscious Light. Guru is a principle, a function, and not a body-mind, although it may appear to the external observer as such.

Guru is Mirror, is the Divine Force that directly appears – seemingly outside -  to the Seeker who has not yet found his/her own Divine Truth within. But in truth “inside and outside” is the illusion of the Disciple.

So a Sacred Spiritual Transmission is taking place in this relationship that is able to awaken the Seeker to his/her own Truth within. However this Truth is not found IN the body-mind. The body-mind only possesses  portals that provide an opening into a higher Reality. In this Reality Consciousness and Light or Energy, the male and female aspect of the Divine are One. In the ancient Indian spiritual tradition it is called the Unity of Shiva-Shakti.

Q: How is it possible that the Realization of the Guru tends to continue to influence the Disciple, even when they are physically apart or when the Guru left the body and even returned to Source Itself?

A: It happens by intention of the Guru, based on Grace and Blessing.  The Guru magnifies the awareness of Self in the Disciple, and he recognizes therefore in contemplation his own Self in the Guru. If the Recognition is True, it is very powerful as it provokes the Guru’s Spirit Force upon the Disciple which initiates  profound and palpable changes in his body-mind while it also alters the DNA and molecular structure. The body-mind of the Guru disappears in the Disciple's deep and self-forgetting contemplation of the Guru and only the One Self remains. What the Disciple first recognizes in the Guru he discovers ultimately in and as Him-Self.

When the Disciple, by the Grace of the Guru, Who is his own Self, finally comes to understand by direct knowing  that there is only One Self, One Radiant Consciousness, and not “two”, he/she acknowledges It as his/her Own. This recognition requires the understanding of one's own body-mind and the permanent capability to transcend it. Then the Guru has fulfilled His/Her purpose.
But the Love between Guru and Disciple continues eternally.
.~.
Beloved friends, here ends the conversation ~ that was rather an experience of deep-felt awe, great stillness and eternal love.
It is my wish that you can feel it too!
Much love to you all